Summary: Researchers define the proteome of neural stem cell niches and the entire set of expressed proteins. The findings shed light on key regulators of neurogenesis.

In mammalian adult brains, neural stem cells are only present in few specific parts, so called niches. Only these niches are capable of generating new neurons. For the first time, researchers defined the proteome of these niches, the entire set of expressed proteins, and compared it to other regions of the brain. The findings help to identify key regulators for neurogenesis, an important step towards activating neurogenesis after brain injuries.

What distinguishes neural stem cell niches from other parts of the brain? Why do only these niches contain neural stem cells and the rest of the brain does not? So far, we did not know what gives the niches their special function. Also, little was known about factors allowing the integration of new neurons into existing networks in the adult brain. A comparison of the proteome of neural stem cell niches and the region in which new neurons integrate with the remaining part of the brain, aimed to shed light about the unique niche environment allowing neurogenesis in the otherwise non-permissive adult mammalian brain.

In a first step, Magdalena Götz and her team characterized the proteome of these specific brain regions. They used the largest neural stem cell niche in the subependymal zone of the brain and the olfactory bulb as this is the region where newly-generated neurons from the subependymal zone migrate, differentiate and integrate. They then compared this proteome to the cerebral cortex, an area where neither neurogenesis nor integration of new neurons occurs as in most parts of the adult mammalian brain. As a result, the team found that the proteome of the neurogenic niche evokes a niche-specific extracellular matrix architecture. One of the most important characteristics was the high solubility of the extracellular matrix. Other characteristic proteins however, such as those of the multifunctional enzyme transglutaminase 2, are hardly soluble meaning strongly cross-linked. Using pharmacological inhibitors as well as genetic experiments, the team was able to show that transglutaminase 2 is crucial for the regulation of neurogenesis. Furthermore, due to its cross-linking properties, the enzyme may contribute to the unique stiffness of the neural stem cell niche in otherwise soft brain tissue. 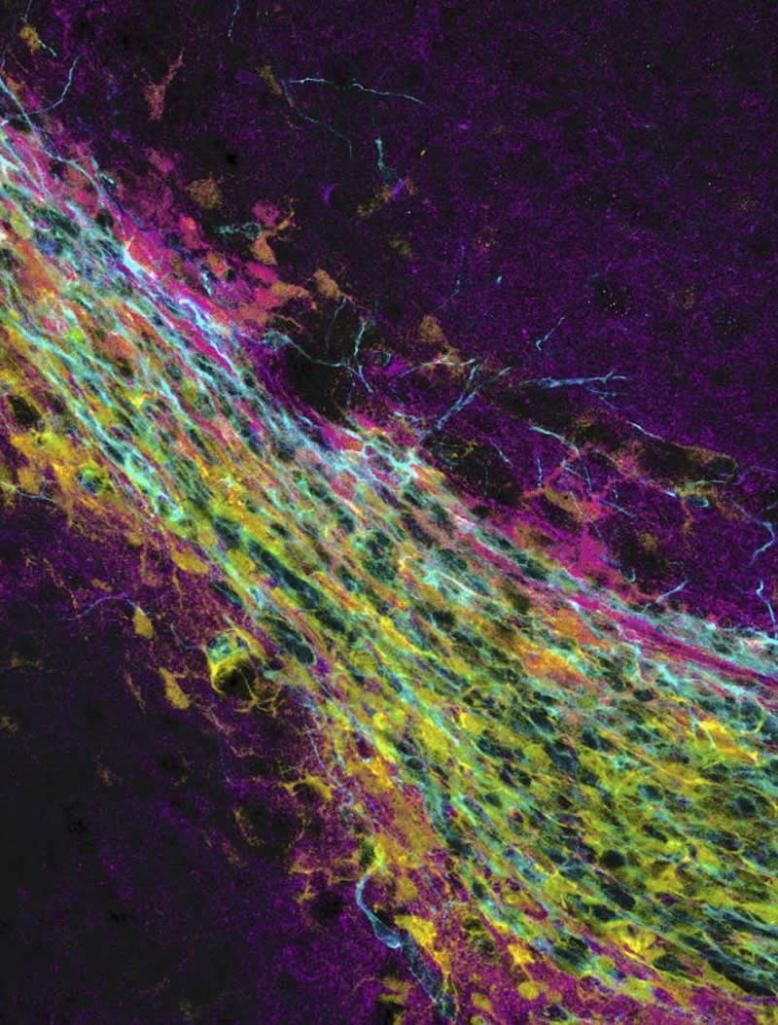 Having established the differences between the proteome of a neurogenic and a non-neurogenic site is a key step. It could help to find ways to convert the one to the other. Equally important for future cell replacement therapies is the generation of a beneficial environment for the integration of new neurons in the cerebral cortex by activating factors from the olfactory bulb, an area where new neurons are constantly being integrated. Next, the researchers want to compare these proteomes to the environment after brain injury. Their aim is to create new neurons after brain injury by turning the injured region into a neurogenic stem cell niche. Injured tissue demonstrates alternative phenotypes, that may create additional barriers for activating neurogenesis: “One of our collaborators at the University of Cambridge showed that scar tissue in the brain is particularly soft – a trait that is hostile to the function of neurogenesis. Overcoming this hurdle and generating a beneficial environment for repair will be the next steps of our research”, says Götz.

Summary
The mammalian brain contains few niches for neural stem cells (NSCs) capable of generating new neurons, whereas other regions are primarily gliogenic. Here we leverage the spatial separation of the sub-ependymal zone NSC niche and the olfactory bulb, the region to which newly generated neurons from the sub-ependymal zone migrate and integrate, and present a comprehensive proteomic characterization of these regions in comparison to the cerebral cortex, which is not conducive to neurogenesis and integration of new neurons. We find differing compositions of regulatory extracellular matrix (ECM) components in the neurogenic niche. We further show that quiescent NSCs are the main source of their local ECM, including the multi-functional enzyme transglutaminase 2, which we show is crucial for neurogenesis. Atomic force microscopy corroborated indications from the proteomic analyses that neurogenic niches are significantly stiffer than non-neurogenic parenchyma. Together these findings provide a powerful resource for unraveling unique compositions of neurogenic niches.

How to borrow money in 2020: the best and worst ways