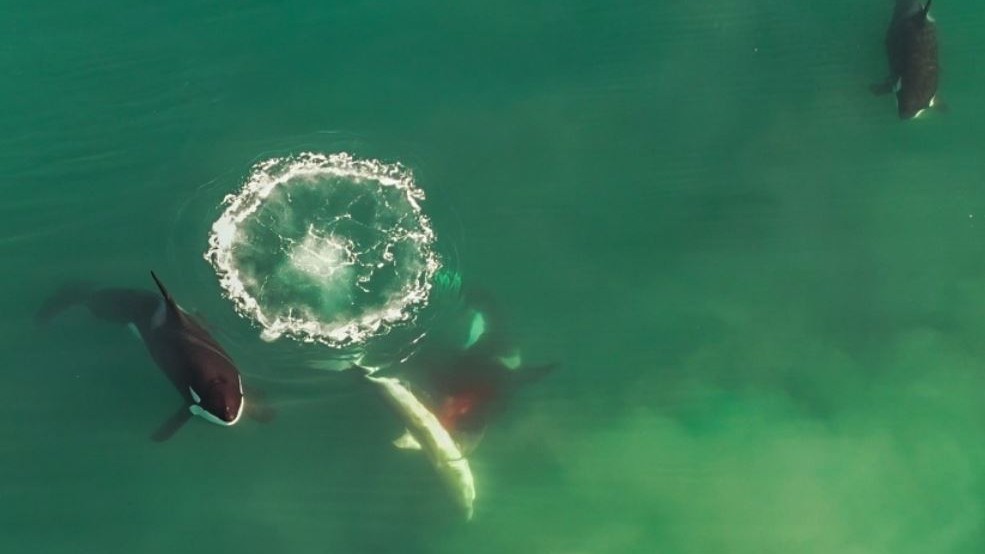 For at least five years, a pair of serial killer whales in South Africa has been slaughtering great white sharks and eating their livers. (No fava beans or chianti necessary). Now, researchers have shared the world’s first video footage of one such orca-on-shark attack.

In June, researchers reported that the two male orcas (Orcinus orca) — who go by the aliases Port and Starboard — had attacked at least eight great white sharks (Carcharodon carcharias) near South Africa’s Gansbaai coast since they were first spotted in 2017. Known for their distinctively floppy dorsal fins (one droops to the left, or port side, while the other droops to the right, or starboard side), the killer whale duo is just two orcas among many that are thought to be terrorizing the great whites of Gansbaai.

The new footage, shot during an hour-long hunt via drone and helicopter, reveals that the orca known as Starboard helped several pod-mates attack a great white, then gobbled up several chunks of white meat that appear to be the shark’s fatty liver.

This is the first time that an orca has been seen in action attacking a great white, according to the authors of a new study published Oct. 3 in the journal Ecology; all previous whale-on-shark attacks in the region were just inferred from mutilated shark carcasses that washed up on the Gansbaii coast.

“This behavior has never been witnessed in detail before, and certainly never from the air,” lead study author Alison Towner, a senior shark scientist at Marine Dynamics Academy in Gansbaai, South Africa, said in a statement.

The newly released footage also reveals some of the evasive tactics employed by great whites when being stalked by the menacing orcas.

On two occasions, an orca hunter slowly approached a great white with the intent to kill; the shark, rather than fleeing, stayed close to the orca and kept it in sight while circling through the water — a defensive strategy that seals and turtles use when evading sharks, according to the researchers. However, the team added, this strategy likely isn’t very effective against orcas, who are social animals that hunt in groups.

Around the world, orcas have been observed killing everything from little fish to fearsome sharks, sea lions and even blue whales. But rarely has one pod of easily identifiable orcas had such a clear and immediate impact on their habitat, the researchers wrote in the African Journal of Marine Science in June.

Attacks from Port, Starboard and their gang have inspired the great white sharks of Gansbaai to adopt “large-scale avoidance strategies,” Towner said, with individual sharks disappearing from the region for weeks to months at a time after sightings of Port and Starboard. Historically, the area has been dominated by great whites — not orcas — the researchers added.

These long-term shark migrations have already had downstream effects on the ecosystem. Most notably, a new mid-level predator called the bronze whaler shark (Carcharhinus brachyurus) has moved into the area to take over the niche that great whites previously filled, according to the researchers. Bronze whalers are often preyed upon by great whites, but with the big guys away, bronze whaler sightings have increased significantly at Gansbaai. This shift could ripple down the entire food chain, putting negative pressure on the whole ecosystem, the team added.

Monstrous “Mega-Earthquake” Triggered by Impact That Killed the Dinosaurs