Voters in Michigan will decide whether to protect abortion this November

Voters in Michigan will decide whether to amend the state constitution to include protections for abortion access this November following a contentious battle over including two petition-driven proposals on the ballot.

What is often an ordinary administrative process resulted in prolonged back-and-forth between advocates in favor of and against abortion over the spacing between words on the proposal itself, nearly stymying its chances of being sent to voters. If one of the proposals, titled the Michigan Right to Reproductive Freedom Initiative, is approved by Michigan residents, the state’s constitution would protect the right to reproductive freedom in the state, making it one of several to adopt measures in support of abortion access months after the U.S. Supreme Court overturned Roe v. Wade.

READ MORE: A ballot initiative in Michigan could let voters choose whether abortion is a protected right

The Michigan Supreme Court voted Thursday evening 5-2 to order the inclusion of the measure on the ballot. It was certified by the state’s board of canvassers Friday morning.

“We are energized and motivated now more than ever to restore the protections that were lost under Roe,” Darci McConnell, communications director for the Reproductive Freedom for All campaign, said in an emailed statement to the NewsHour. “This affirms that more than 730,000 voters read, signed, and understood the petitions and that the frivolous claims from the opposition are simply designed to distract from our effort to keep the abortion rights we had under Roe for nearly 50 years.” 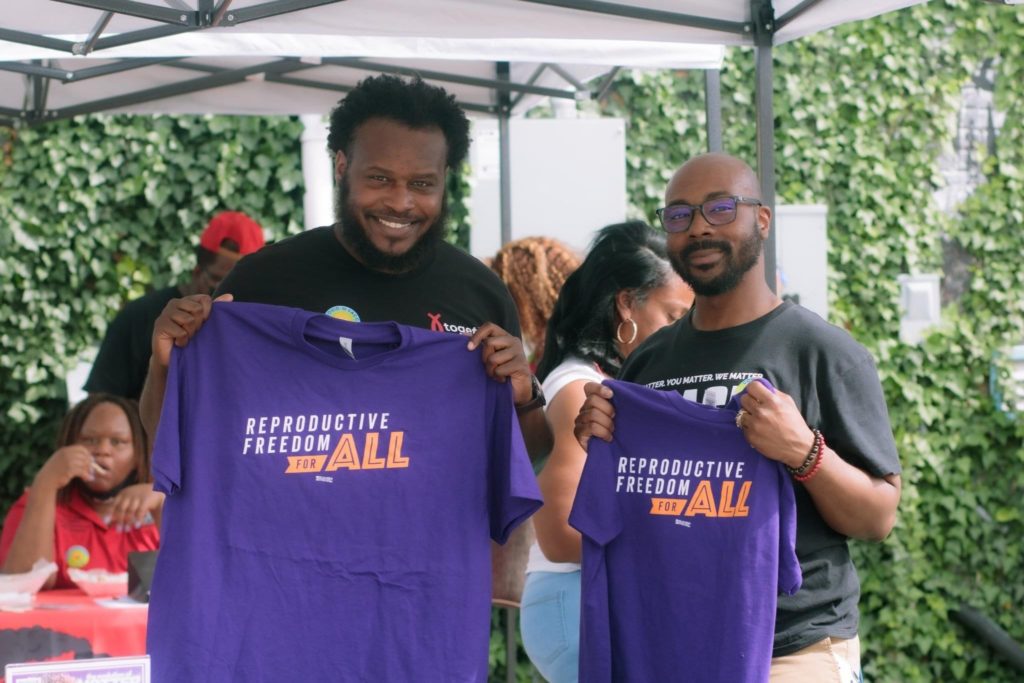 For those who oppose the measure, energy turns to messaging to voters.

“It falls to voters now to reject this mistake-ridden, extreme proposal on Election Day,” Christen Pollo, spokesperson for the Citizens to Support Michigan Women and Children said in a statement emailed to the NewsHour. “We urge voters to say No on November 8th.”

Abortion has remained legal in Michigan because of a patchwork of several temporary, preliminary, and partial injunctions and executive orders against an old 1931 state law that makes abortion a felony and outlaws sale of medication for abortions, including a ruling this week that enforcement of the 1931 law would be unconstitutional. But any of those could end at any time.

Months before the U.S. Supreme Court’s decision to overturn Roe v. Wade in June, a coalition called Michigan Reproductive Freedom for All — led by American Civil Liberties Union (ACLU) of Michigan, Michigan Voices, and Planned Parenthood Advocates of Michigan — began collecting signatures to add the issue to the ballot so that voters could choose to put reproductive freedom into a constitutional amendment.

The Michigan Right to Reproductive Freedom Initiative, should it be passed by voters this fall, would protect “the right to make and effectuate decisions about all matters relating to pregnancy, including but not limited to prenatal care, childbirth, postpartum care, contraception, sterilization, abortion care, miscarriage management, and infertility care” in Michigan’s constitution. More than 750,000 people signed the petition supporting the initiative, more than any other ballot initiative in state history, and far more than the 425,059 signatures required.

READ MORE: Why an obscure Michigan board has the power to reject a ballot initiative on abortion rights

The Michigan Supreme Court also directed the state’s board of canvassers, with a 5-2 vote, to certify a second petition-driven proposal on November’s ballot, titled Promote the Vote 2022, which they did Friday. It will ask voters whether to create a constitutional amendment that supports a number of voting and elections changes, including nine days of early in-person voting, requiring state-funded absentee-ballot drop boxes and postage for absentee applications and ballots, and stronger protections against voter intimidation. More than 660,000 people signed the petition in favor of adding this ballot measure.

After both petitions were submitted to the state’s election bureau, officials analyzed the hundreds of thousands of signatures. Staff said there were no challenges to the number of signatures submitted, and after investigating two challenges by opponents of the measures, recommended that the Board of State Canvassers approve certification of both petitions.

A debate on font and kerning

As hundreds of people gathered for the administrative hearing on the initiative petitions in Lansing last week, Tony Daunt, the chairperson of Michigan’s Board of State Canvassers, reminded the dozens of people signed up to speak during the open comment period that they were not there to talk about the issue of abortion, but to help decide on the validity of the signatures.

By the end of the day, the four person board deadlocked along party lines 2-2, with the two Democrats voting in favor of certification and the two Republicans opposed, and neither initiative petition was certified for the November ballot. Both petition initiatives filed lawsuits the next day asking the Michigan Supreme Court to rule on the matter immediately, with a looming Sept. 9 deadline to finalize ballots.

“[The two Republicans on the Board of State Canvassers] would disenfranchise millions of Michiganders not because they believe the many thousands of Michiganders who signed the proposal were confused by it, but because they think they have identified a technicality that allows them to do so, a game of gotcha gone very bad,” wrote Michigan Chief Justice Bridget M. McCormack in a concurring opinion in Thursday’s ruling. “What a sad marker of the times.” 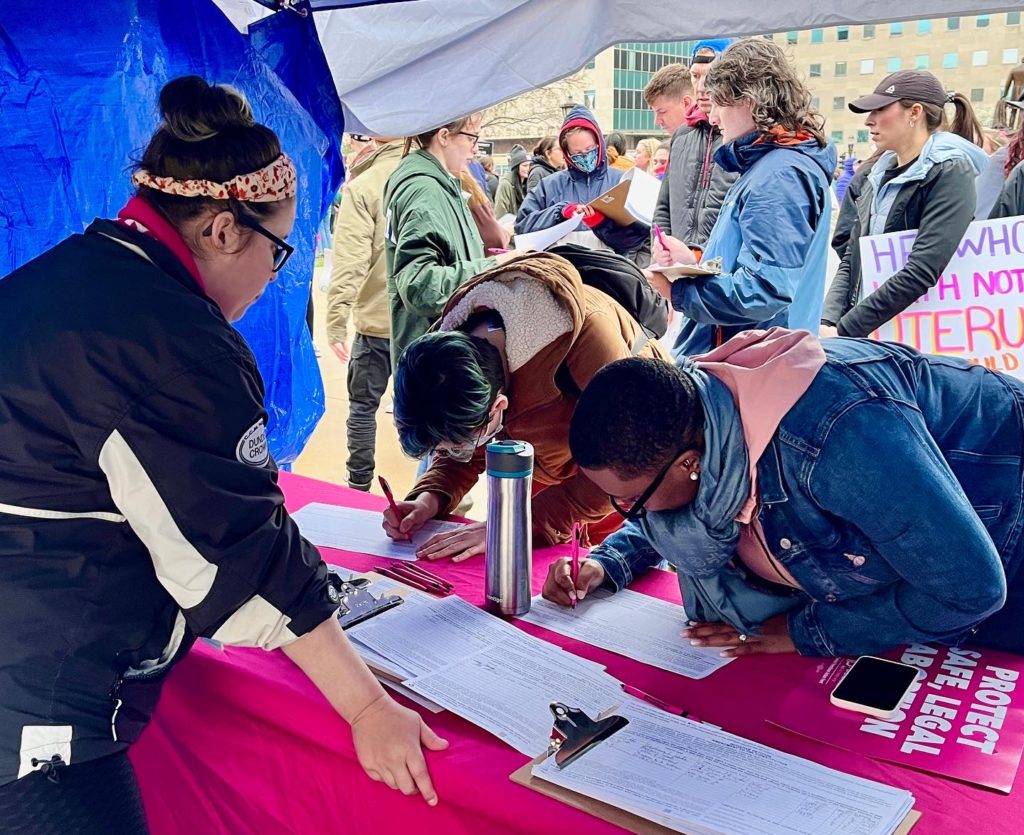 Planned Parenthood Advocates of Michigan (PPAM) volunteers collect signatures for a ballot measure to amend the state constitution to protect reproductive rights in the state. Photo courtesy of PPAM

For Reproductive Freedom for All, the stated issue was that the kerning — the size of the spaces between words — was too small, making the petition hard to understand.

The Secretary of State also strongly encourages that proposed text be printed in all capital letters to differentiate it from existing and excised text, which is printed in mixed upper and lower case. Sans serif fonts such as Arial, Tahoma or Verdana are also strongly encouraged. It is also common for petitions to be printed with both left and right margins justified.

There is no guidance on the kerning — the width of the spaces between words.

All of these requirements — 8-point type, all capital letters, sans serif font on paper (as opposed to digital) — plus full justified text make for a document that is very difficult to read from a design standpoint. Readability is further diminished when excerpts from the original documents are reproduced smaller on 8.5 by 11 inch paper for court documents. The Board of State Canvassers only approves the form and not the substance of the petition.

In mid-August, Citizens to Support MI Women and Children challenged the form of the petition, arguing that the Board should reject the petition because missing spaces throughout the text within the substance of the petition resulted in some words being condensed into long, nonsensical letter combinations that were not real words.

Reproductive Freedom for All’s response was that all the words and all the spaces were there, in the right order, and argued it could be verified by copying and pasting the text into any word-processing software. Even though the spaces are small, the coalition said the spaces still existed and readers had no problem understanding the proposed amendment. It also argued the opposition’s challenge did not question the validity of any individual signatures or any of the mandatory elements required of the petition’s form, but were instead challenging the substance of the petition, which is beyond the purview of the Board.

“The Michigan Election Law is silent on the amount of space that must be between letters and words in a petition,” said a report from the state Bureau of Elections. “It does not provide requirements as to spacing or ‘kerning.’ Staff makes no recommendation as to the merits of these legal arguments as they pertain to the substance of the petition.” 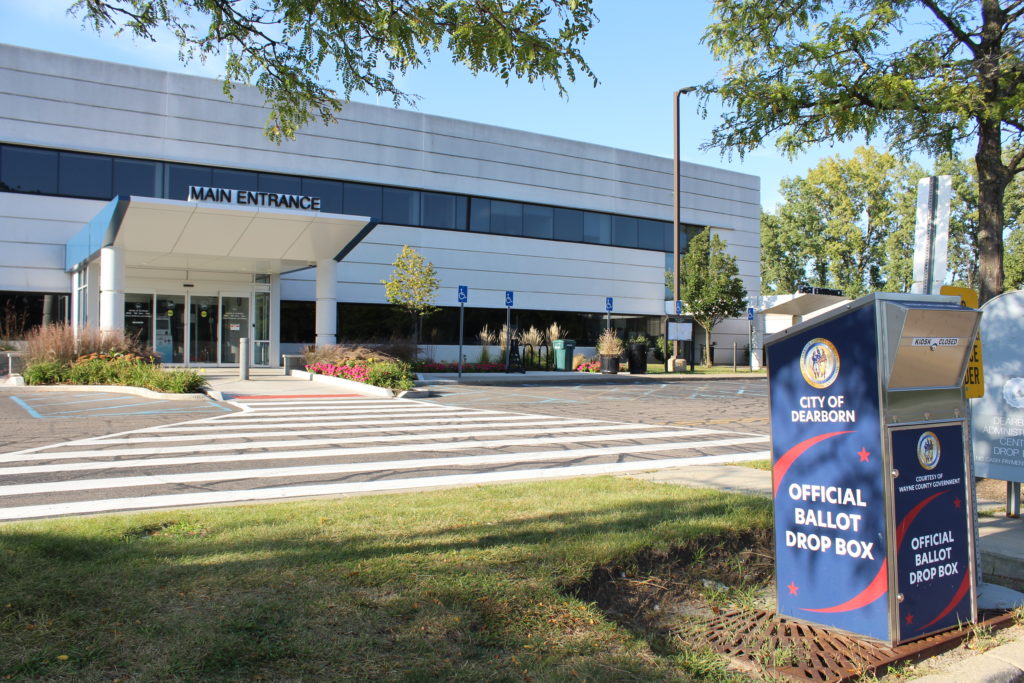 In his experience, “no one said anything about the spacing of the words,” he said.

Totten said organizations like Michigan Voices and Reproductive Freedom for All held trainings and meetings every week that taught volunteers how to effectively communicate the messaging of the initiative.

“I did not encounter one voter who signed not knowing what they were signing for, nor do I know any voter who would sign a petition not knowing or being clear on what they were actually signing. Because they do ask,” Totten said. “It has been my experience here that when you’re asking someone to sign their name on something, [that] if they don’t understand, they will ask clarifying questions.”

Alter versus abrogate (amend or replace)

The voting proposal, Promote the Vote 2022, was also tied up in the process, specifically because of the word abrogate and whether there would be more changes to Michigan’s constitution than listed.

Similar to the reproductive freedom proposal, the two Republicans on the Board of State Canvassers opposed certification. 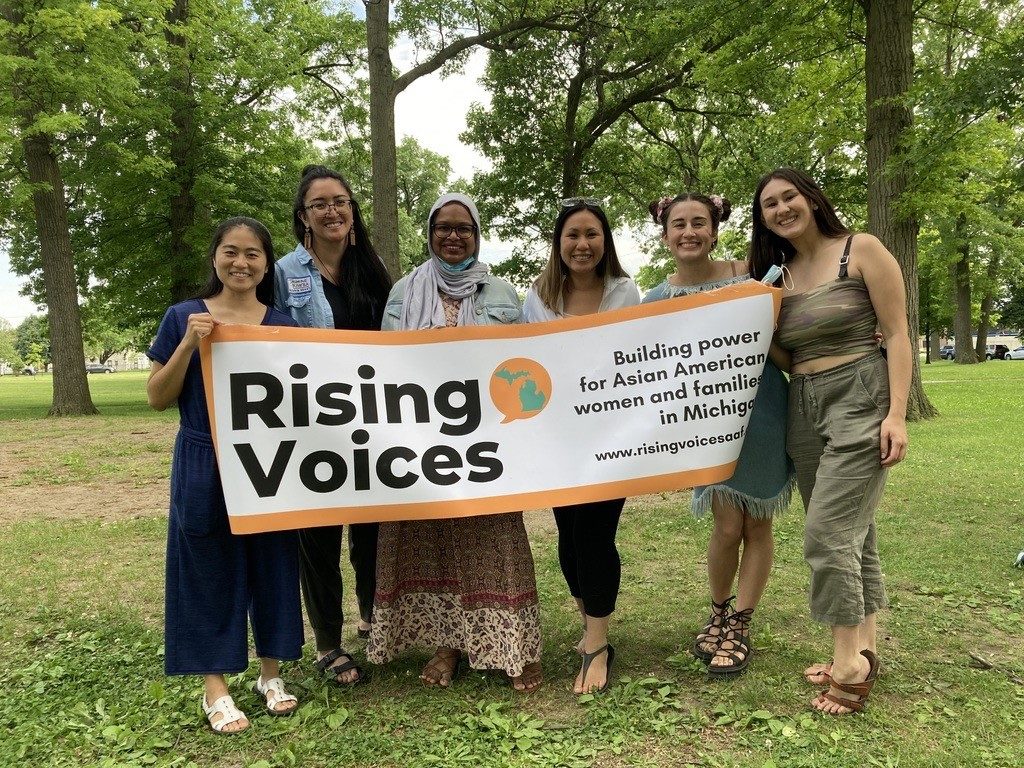 Staff and volunteers for the nonprofit Rising Voices were among the dozens of nonprofit organizations that volunteered to help collect signatures for the “Michigan Right to Reproductive Freedom Initiative” and “Promote the Vote 2022” ballot initiative petitions. Here at their Harumatsuri picnic in Ferndale, Michigan, with partner Tsuru for Solidarity, where they collected signatures for both RFFA and PTV with the Japanese American community. Photo courtesy of Rising Voices.

Wang said that Voters Not Politicians 2022 had 5,000 volunteers who collected 170,000 of the 660,000 signatures supporting the proposal. “And what we heard on the street was always the same,” Wang said. “It’s always that voters really support this measure, regardless of whether Republicans or independents or Democrats. And all we want to do is protect our fundamental right to vote.”

The Secretary of State encourages proposed changes to the constitution to be represented on the petition by striking out the text that is to be altered or excised with a single line and by putting additions to the text in all capital letters.

The Bureau of Elections staff analysis concluded that the petition met all the requirements of form. It also pointed to Michigan Supreme Court decisions and case law that states that not every element in the constitution that is affected needs to be included in a proposal because that would be too confusing for voters. Whether additional sections of the constitution should have been included is a legal question about the substance of the petition, not the form.

The Board of State Canvassers debated the limits of the words alter and abrogate.

In Thursday’s ruling, Michigan Supreme Court Chief Justice Bridget M. McCormack chastised the Board of State Canvassers for overstepping the scope of its job. “The Board’s duty is to determine whether a petition has sufficient signatures and whether its form complies with statutory requirements,” McCormack wrote in a concurring opinion. “The challengers have a forum in which to have this objection addressed: court.”

“Absent an insufficient number of signatures or a petition form that doesn’t comply with unambiguous statutory requirements, the Board lacks the authority to refuse to certify a petition. Because the challenger here alleged neither of those defects, the Board had a duty to certify the petition,” McCormack wrote. “The Board’s failure to do so seems to be disappointing evidence of the weakened state of our polity.”