What happens to deferred intentions in the brain?

Summary: Completed intentions are often not deactivated immediately but continue to affect people, especially when it comes to implementing new intentions.

Placing a checkmark on the to-do list is an extremely liberating feeling for many eager list lovers, especially when the task has been postponed for a long time. But what happens in our brain when we have completed a postponed task? Will it be deactivated? If so, how? A team of scientists from the Collaborative Research Centre 940 “Volition and Cognitive Control” at TU Dresden, together with two leading international experts, Julie Bugg and Michael Scullin, investigated these questions in a systematic review article.

Headed by Dr. Marcus Möschl from the Chair of General Psychology at TU Dresden, the team analysed 20 years of research on intention deactivation and so-called aftereffects of completed intentions across different research fields.

There are many everyday examples of postponed intentions: children who put off tidying up their room until later, people planning to call their best friend tomorrow rather than now, and so on. Intentions have been proven to influence our thoughts and actions until they are completed. Afterwards, they could be deactivated and removed from our mental to-do list.

“To our surprise, however, the studies we reviewed have repeatedly shown that completed intentions are sometimes not deactivated immediately, but continue to affect people. For instance, when implementing new intentions,” explains Marcus Möschl.

In particular, this happens, when an action has been postponed until a certain salient event or stimulus function as a reminder. Elderly or sick people, for instance, may postpone taking medication until they receive a calendar notification on their mobile. If this alarm accidently rings again after having taken the medication, they may not only recall their intention, in drastic cases, they even might take their medication again. 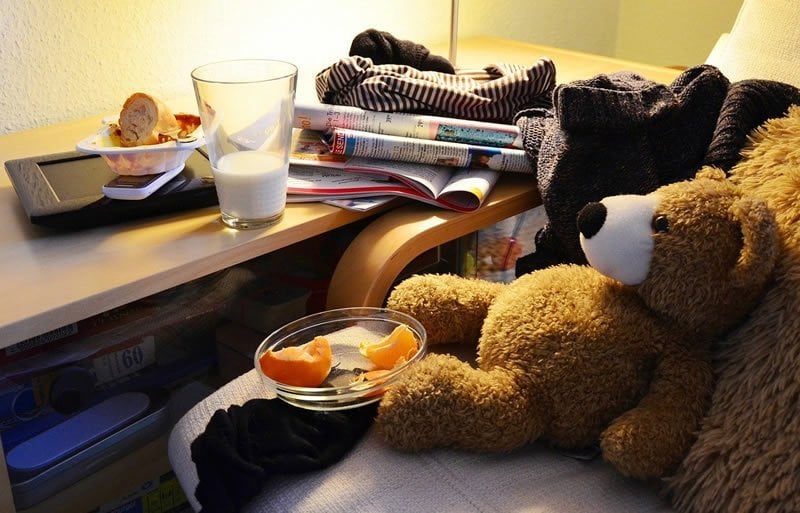 There are many everyday examples of postponed intentions: children who put off tidying up their room until later, people planning to call their best friend tomorrow rather than now, and so on. Image is in the public domain.

However, as the studies suggest, such drastic cases of aftereffects are rather rare. “Often, intentions seem to be deactivated as soon as they are completed,” continues Dr. Möschl. “However, this deactivation does not always work perfectly like switching the light on and off. In some cases, connections between a stimulus and a completed action have to be dissolved step by step until the event or stimulus no longer trigger the retrieval of the completed intention.”

Now the scientists want to investigate in which situations it could be advantageous if completed intentions remain activated and whether these aftereffects play a role in learning new routines.

Prospective memory, the ability to perform an intended action in the future, is an essential aspect of goal-directed behavior. Intentions influence our behavior and shape the way we process and interact with our environment. One important question for research on prospective memory and goal-directed behavior is whether this influence stops after the intention has been completed successfully. Are intention representations deactivated from memory after their completion, and if so, how? Here, we systematically review 20 years of research on intention deactivation and so-called aftereffects of completed intentions across different research fields to offer an integrative perspective on this topic. We first introduce the currently dominant accounts of aftereffects (inhibition vs. retrieval) and illustrate the paradigms, findings, and interpretations that these accounts developed from. We then review the evidence for each account based on the extant research in these paradigms. While early studies proposed a rapid deactivation or even inhibition of completed intentions, more recent studies mostly suggested that intentions continue to be retrieved even after completion and interfere with subsequent performance. Although these accounts of aftereffects seem mutually exclusive, we will show that they might be two sides of the same coin. That is, intention deactivation and the occurrence of aftereffects are modulated by a multitude of factors that either foster a rapid deactivation or lead to continued retrieval of completed intentions. Lastly, we outline future directions and novel experimental procedures for research on mechanisms and modulators of intention deactivation and discuss practical implications of our findings.

ISO or ESPP Reporting due by January 31