Life-threatening storm surge from Hurricane Dorian could affect some areas of North and South Carolina as the storm moves along the coast Thursday and Friday, due to the timing of tides, defenses, such as dunes, eroded by past flooding, and longer-term trends associated with climate change.

The National Hurricane Center is predicting up to eight feet of storm surge — when ocean water is pushed inland by a hurricane — in the most at-risk regions, causing state and local officials to issue evacuation warnings in numerous communities.

“We’re preparing for the worst,” North Carolina Gov. Roy Cooper told reporters during a tour of one of the state’s evacuation shelters Thursday.

Storm surge, combined with rainfall from a hurricane, can have devastating consequences, even for communities that are not on the coast.

“When a hurricane happens, salt water gets shoved up the river, and it effectively becomes a plug,” said Jamie Rhame, a National Hurricane Center storm surge specialist.

That means the often heavy rainfall produced by hurricanes can no longer drain into the ocean, increasing the chance of flooding.

Where the largest storm surge is expected

Charleston, South Carolina, appears to have avoided the worst of the storm surge because Dorian hit during low tide. The National Hurricane Center had predicted Thursday morning that the region could see as much as four feet of storm surge.

But the tide is expected to be high when the storm reaches other coastal communities further north. 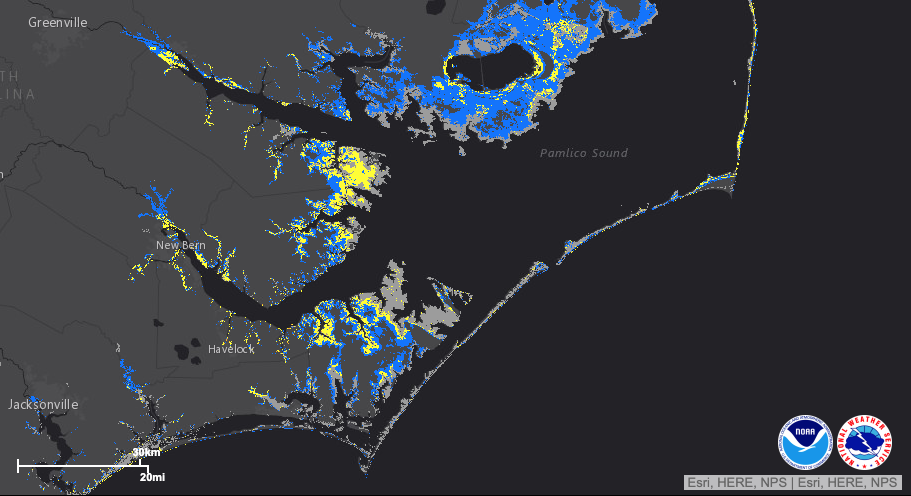 A map from the National Hurricane Center shows where storm surge could be the worst in the Outer Banks area of North Carolina. Photo courtesy: NOAA

Click the image above for an interactive map of expected storm surge from Hurricane Dorian.

Myrtle Beach, South Carolina could see a storm surge between five and eight feet. The storm surge near the Outer Banks of North Carolina is expected to be four to seven feet. Virginia Beach could see two to four feet of storm surge Friday evening.

Meteorologists caution that the beach communities are not the only areas that will be affected. Water is likely to be blown into inland channels and sounds as well.

Storm surge occurs when strong winds, along with low pressure in the storm’s center, push up ocean water above normal sea level. Besides low pressure and stronger winds, a hurricane’s course, size and speed can also affect the height of a storm surge.

Climate change may also play a role. Research has shown that warming oceans are worsening the consequences of hurricanes.

Hurricanes are also moving more slowly and stalling more frequently, which can exacerbate storm surge, although scientists have yet to prove those trends are being caused by climate change. 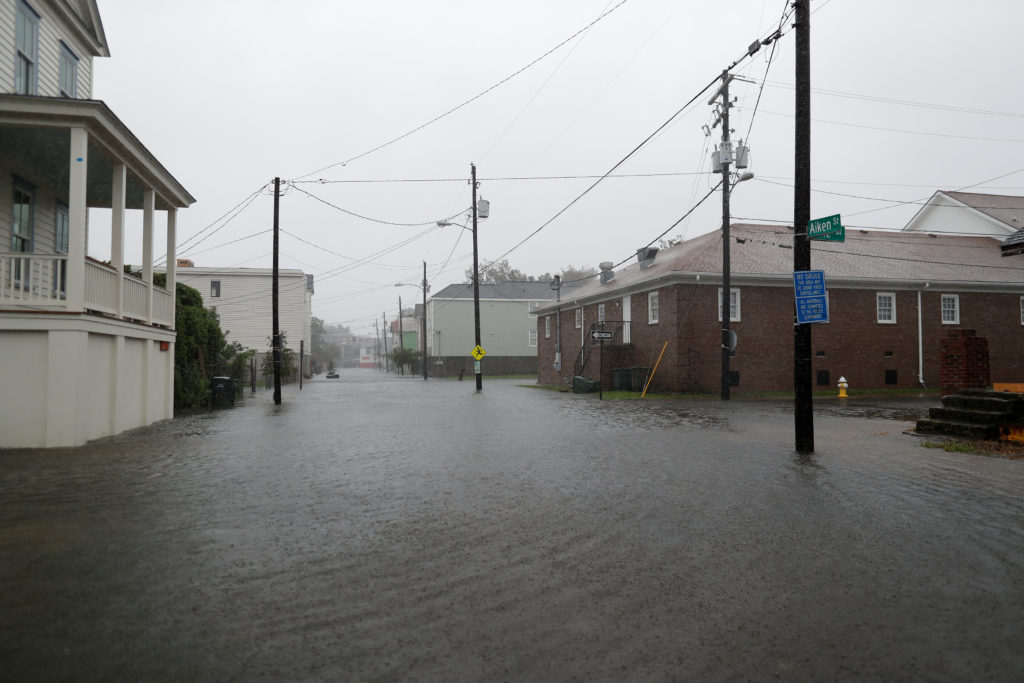 On top of those changes, sea level rise, which is caused by melting glaciers and thermal expansion from warmer waters, can exacerbate the effect a storm has on a community because the surge starts from a higher level.

“Even if the storm itself is the same, because of sea level rise, the storm surge and flooding is particularly worse,” said Rick Luettich, director of the University of North Carolina’s Institute of Marine Sciences.

Seawalls, which are made from concrete or stone, and built parallel to shore, have traditionally been used to guard against hurricanes. They have also proven to be poor protection against storm surge and sea level rise because the water can overtop the structures and even break them apart.

By some estimates, North Carolina’s coastal sea levels are as much as 11 inches higher than in 1950. Around Wilmington, North Carolina, the sea level is rising by an inch every two years and the rate is expected to accelerate as climate change worsens.

Many of the areas in Dorian’s path are still recovering from Hurricane Florence, which brought a storm surge of more than 10 feet in some areas and dumped more than 30 inches of rain on the Carolinas.

For New Hanover County, an area including Wilmington, North Carolina, which was battered by Florence, Hurricane Dorian “stirs up a lot of panic in the community. We are not ready yet,” said Audrey Hart, executive director of the New Hanover County Disaster Coalition. 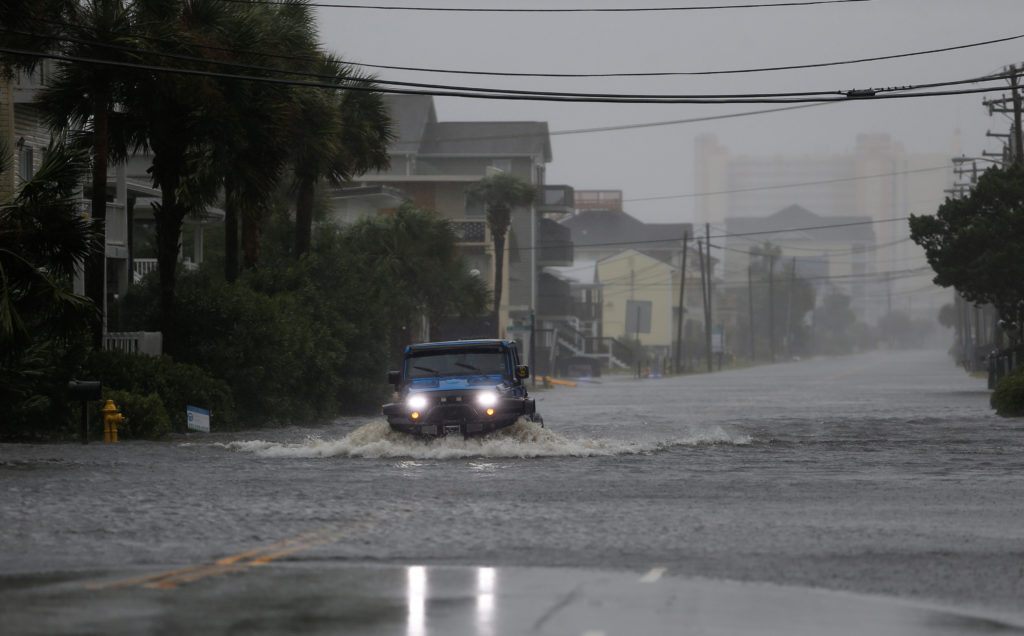 A vehicle navigates a flooded Ocean Boulevard during Hurricane Florence in North Myrtle Beach, South Carolina, on September 14, 2018. One year later, the community is facing feet of storm surge from Hurricane Dorian. Photo by Randall Hill/Reuters

As late as last week, that nonprofit was fielding requests from people who still need new furniture and appliances to replace ones ruined by Florence’s floodwaters. Even though the outside of most buildings appear in good shape, many residents are still trying to clear the inside of their homes of mold.

The effects of Florence are also still affecting the region’s landscape. Many of the sand dunes that help guard against hurricanes were also destroyed by Florence and have not been built back up. Luettich said that means coastal areas could be more vulnerable to flooding and erosion.

But because Hurricane Dorian is on a different track than Florence — Dorian is coming up from the south, while Florence came almost directly from the east — some communities that bore the brunt of the last storm could be spared this time around.

Instead, areas that did not experience flooding from Florence a year ago could be at risk, as the winds come in at a different angle and could cause a storm surge. That means some residents might not realize just how vulnerable they are. How cells sense and adapt to oxygen availability — ScienceDaily

Can CBD Help Your Complexion?

Guests at Ashley Graham’s Baby Shower Got Tattoos and Piercings Bridging the gap of risk communication and management using the SUDEP... The worst passwords of 2019 California could be 1st state to sell its own prescription drugs